Home » Tahukah Anda » Gesang, as Popular as His Songs Flow throughout Asia

Gesang, as Popular as His Songs Flow throughout Asia

Indonesian singer and songwriter Gesang Martohartono, whose 1940s hit “Bengawan Solo” became a favorite throughout Asia, died Thursday of complications from diabetes and heart problems. He was 92.

The songwriter, popularly known as Gesang, died at Muhammadiyah Hospital in the Central Java town of Solo, said Beti Andriani, a hospital spokeswoman. He was admitted Wednesday.  Gesang composed the song about the Solo River, the longest river on the island of Java, in the traditional keroncong style, a Portuguese-influenced folk music using stringed instruments. 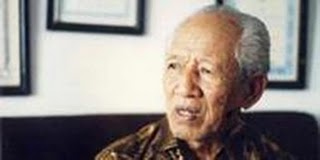 One of Gesang’s most popular songs is “Bengawan Solo” which describes  the  Solo river’s significance in the lives of Central Java people.  “Bengawan Solo” was translated into at least 13 languages and covered by Chinese, Japanese and Dutch singers. Gesang, who could not read music, was one of 10 brothers. He married once but had no children.

Among his other famous songs were “Sapu Tangan” (Handkerchief) in 1941, “Tirtonadi” in 1942 and “Jembatan Merah” (Red Bridge). Gesang earned fame as a composer of  “keroncong” (popular Indonesian music with Portuguese influence) songs.  His body is to be buried at the Pracimalaya public  cemetery on Friday.

“In his last words he asked for the preservation of keroncong music,” Yani Effendi, his nephew’s son, said.

Yani who had remained at Gesang’s bedside while being treated at the hospital said, since Thursday afternoon, his grand uncle had been  asking to be returned home. His doctors however refused to release him  because he had not yet fully recovered.